Just a little blurp to remind everyone that Crucial Changes will once again be attending Chicago Zine Fest in March.  Last year was a really good time, and we're currently gearing up for the fest right now as I type this. Expect a new CCPP zine and CD-R punk comp. to be ready for the event.  Any readers of this blog who are attending, please be sure to stop by and say "hi".  Cheers! 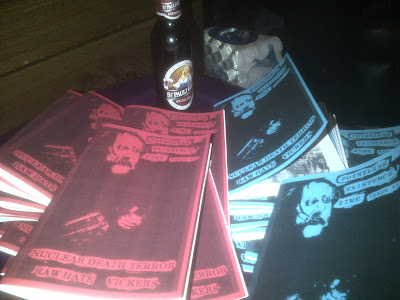 Martin Gonzalez grew up in Los Angeles and has moved to Omaha fairly recently and with him he brought a breath of fresh air into the local punk scene with his taste in music and attitude.  After working diligently for weeks, Martin finally has his first zine available titled Pointless Existence printed via Crucial Changes Printing Press.

Can be purchased from Martin himself at:
pefanzine@gmail.com
$3/ea.- $1.50 wholesale
pointlessexistencezine.blogspot.com

Or by emailing CCPP at CrucialChangesHQ (at) gmail (dot) com

I feel that a lot of good shit came out this year, but I’m going to cut it down to just a few releases.  Why?  Most of the shit I know I'm going to like because it leaks on the internet.  The days of taking a chance and possibly buying a shit record are in the past for me.  Anyways fuck it, lets get on with the list (in no particular order):

Seems like I bought a lot more lps this year compared to past years.  A lot of them were short enough to be 7”s, but better sound quality and the extra space for artwork is nice.

This band is from the London, and I don’t know anything else about them, but I read a strong review about this platter in a big time zine, and was interested.  And yes, it does rule.  No play weirdo 80’s styled hardcore similar to Die Kruezen but avoid all the trappings that are often associated with a lot of the bands who also play this style.  Yeah it has some weird guitar parts, but it’s tastefully done.

The most 80’s Boston Hardcore sounding record to come out since Voorhees - Spilling Blood Without Reason.  This 10 song 12” is super pissed off, moshy, and I love that all the drum fills are on the snare. Better than the Boston Stanglah lp.

Here is the debut lp by this Spanish  fast hardcore band via  Montreal that draws heavy influence from the classic 80’s Italian sound.  The production is way more cleaned up on this record compared to the bands past output and it benefits the band greatly.  Awesome record, great artwork/packaging, and lyrics are in Spanish, so I only vaguely know what the singer is saying, but it only adds to the flavor for me.  La Vida Es Un Mus is one of the best Euro hardcore label going and this lp keeps the streak of great releases going.  This lp can be bought here in the US via Sorry State Records.

Bay Area’s favorite hardcore band is back and have another lp.  Last years release nearly made my list of 2011 but this platter defiantly makes it this time around.  No Statik has all kinds of tricks of their sleeves on this lp playing a handful of styles of blast beats and some nice breakdowns centered around a core of fast 80’s styled hardcore with nasty screamed female vocals.  The first side of this record is one song and the first 10 mins of it is various noises that  isn’t for everyone, but once the guitars and drums kick in it full on hardcore.  Side B just rips till the end, no bullshit.   Awesome release.

This 12” is short but it rips.  Creem are from NYC but play more like a Boston Style of hardcore.  I thought the demo was OK, and the 45 single was a total meh, but this record makes up for the sluggish start.  Last time I was in NYC I saw these guys play their first show and they didn’t have anything recorded yet.  Anyway they were one of my favorite bands of the night and I’m glad they finally released a record that sounds as sick as they did live that night.

Citizens Arrest are back with an all-new 7” in 2012 and they prove that they are better than your band.  This record is more akin sonically to their debut 7” A Light In The Darkness back in 1990 as apposed to the more thuggish lp Colossus that came out the following year..  If you don’t know of this classic NYC hardcore band, drop out now.  These dudes can deliver it live as well.

After a pretty good demo also this year, Bloodkrow Butcher from Boston drop their UK82 inspired debut 7” that features a member of Brain Killer.  A very tried and true sound that is played well.

These guys continue to make my year end lists, this time with a 6 song 7” that displays their over the top noise not music style of hardcore.  I must admit that they are getting less punishing with each release but they keep up with the style and continue to play it well.

This band features players from some of my favorite NYC hardcore bands, and it sounds a lot like their other bands.  It’s good shit though.  Nice 80’s style hardcore drawing influences from classic UK street punk.  This shit is long sold out so you’ll have to download it.

Raw 80’s styled hardcore from Toronto that features members of Urban Blight and sounds pretty much like Urban Blight.  That’s not a bad thing.  Out now as a 7” via Painkiller Records.

Sexual Human In Turmoil is the name of this band, yeah I SHIT (lol) you not.  Anyways, it’s another Urban Blight side project and it’s has one of the most ummm… not so talented sounding drummers I’ve heard in a good while.  But hey, so did Agnostic Front and they are my favorite hardcore band all time.

It seemed like once summer rolled around, nearly all the DIY shows started much later than ever before and because of this I did miss quite a few shows that I did want to attend and snap some photos, hang out, fuck off, etc.  I however, did attend quite a bit of shows this year and here are my favorite bands/performances I caught in 2012...

I just really heard of this band only a few months before the show, but the videos they had on the internet really impressed me.  I was actually surprised that they were on tour and were gonna hit up a DIY show space that is close to my house.  I remember this being an over booked show forcing NSU to play somewhere in the middle.  I felt sorry for all the other bands who played after their super energetic set.

Hoax are a pretty damn good band.  I caught them at an after party show when I was in NYC two years ago so I was already familiar with what they brought live.  They have one of the most in-your-face, dive into the crowd type of singer that likes to roll around and bash his face in with the mic, it’s pretty sweet.   This show was supposed to happen at the West Wing but due to a lot of kids drinking outside, the cops shut it down.  The show was moved last minute though to another spot and Hoax got to play.  Not that many people traveled to the other spot, but those who did slammed it up quite a bit in the basement.

A handful of local noize artists and groups from Omaha and Lincoln decided to put on a show at the West Wing, and to me it went off really well.  Noize is the ultimate anti-music so I’m sure a lot of the people were there for curiosity, but regardless the turnout was pretty good.  Everyone who played that night knew what they were doing and it was really fun to see.  I wear earplugs to shows so I can endure the most insane sounds.  It was something really different and I hope more shows like this happen often.  Gimmie Noize.


Both Brain Tumors shows at the West Wing

I already had and loved their first 7” so I was excited to see this band play live.  These dudes have a great don’t give a fuck about anything attitude, and plus they are fast and tight as hell live.  I’m a bit behind in getting their lp and newest 7”, but I need to get on that shit pronto.  These guys played two shows in a span of a few weeks, it was great.

Hitting up Chicago Zine Fest in 2012 was the most fun I had in a long time yet alone for the year.  I ended up selling a lot of shit, and I met a lot of really cool people.  I also got to catch up with some old friends who live in the city and that was nice as well.  I had such a good time, I will be heading to this years event in March with plans of brining at least one other local zinester with me.