In today's world of punk and hardcore, a lot of it's culture has been co-opted to shirts in mall outlets, fests sponsored by mega corporations, and videos shown on cable television channels. Not to mention independent record labels who promote their bands as a "next level" venture. There are still a few genres in the underground that by the very nature of the music and often the imagery of the performances will always be firmly in trenched in the underground . One genre being noise.

Here in Nebraska, the noise scene has been on somewhat of an uprise in recent years. In Omaha, the frequent playing Grab Ass, and the elusive Tiger Blowjob have been playing out. And popular artists Dapose and Fathr^ play out from time to time. Down in Lincoln, the almighty Plack Blague have been proudly waiving the (rainbow) flag of noise and dance for a few years now, and the return of Violator X has added a significant boost in noise shows throughout the area. (I know I am forgetting more artists as I'm writing this, so expect this post to be revised soon. - Keith) Noise shows in Nebraska range from larger events as support to national acts, to the often intimate small shows for only the most die hard of those who seek ear damage.

I asked some of the local noise artists what Noise is to them: 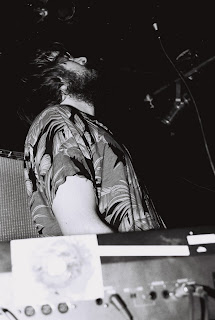 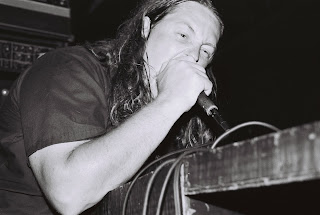 "Noise is the peak of the highest mountain on the path to extreme music... from the attitude of the sounds and visual aesthetic."
-Violator X
The long running regional noise artist Violator X has returned to Lincoln after a stint being based in Minneapolis, MN, and has brought with him a welcomed surge in noise show bookings from regional to international noise artists. A Violator X show varies from performance to performance, but I've noticed a consistent motif of distortion in every show. Armed with an amplified fire axe (no shit), a large box of distortion pedals, and good use of sample loops make Violator X stand out with short bursts that follow more of a straightforward writing approach complete with shouted vocals. Not for the meek.

"An unrecognizable sound that is often unpleasant and disturbing... my life!"
-Raws T. Trombone & Sexma Sheen of Plack Blague
One of the more popular local noise acts in Nebraska is Plack Blague from Lincoln. Plack Blague has a unique blend of noise with a strong emphasis on a danceable beat and sexually provocative lyrics. Their live performance is equally a visual experience with stage attire and use of lighted objects. Vocalist Raws is often seen running into the audience never afraid to hip gyrate on nearby viewers. Plack Blague put on one of the most entertaining shows in the area.

Plack Blague - It's Just Not Lube, It's Love In A Tube

A few days ago, Crucial Changes surpassed the 50k page view mark. I have been waiting on this one for a while now, and it feels good to finally get there. Thanks to everyone who has supported and read Crucial Changes for the past two years.

I have added a couple of new polls on the top right of the blog layout to find out what you like about the blog and what content would like to see more of. The poll will remain up until 2011.

I am down to my remaining few copies of my newest photo zine Scenes. If you would like to buy a copy, click HERE. There will not be a 3rd printing.

In other blog news, I have have been slowly putting together my next Local Spotlight interview consisting of the local noise scene. Expect it to be put up sometime in the next week or so. There will also be at least one more Local Spotlight posted before years end. In final blog news, I have decided that Crucial Changes will no longer upload any non-local albums. I would like to focus on the local scene entirely, and plus there are hundreds of other blogs out there that have plenty of rare hardcore downloads. All previous download links will be taken down at years end.

That is it for now, be sure to vote on the polls at the top right.