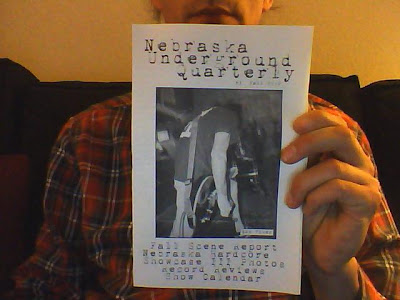 The newest installment of Nebraska Underground Quarterly is now available for $1/free with trade.  This issue features a Fall Scene Report, Photos from Nebraska Hardcore Showcase III, Record Reviews by Taylor, and a Fall Show Calendar.  8 pages, half sized.  Email to order:  CrucialChangesHQ(at)gmail.com

I also have a few leftover CCPP zines for free, ask for availability.

After a very hot summer things have cooled down a bit in the past weeks and we are finally in fall season.  The local hardcore scene however has been heating up with activity.   In the past 3 months quite a few local bands have released records, demos, and tapes many of them being of good quality.  Lincoln mosh masters Bent Life have their self-titled debut 7” out now via 6131 Records and can be bought purchased online from 6131, RevHQ and other fine modern hardcore distros.  These guys are out on the road quite frequently and have been playing the mid-tier fest circuit so be sure to check ‘em out if they come to a town near you if you already haven’t .   Lincoln metal warriors Purgatory have been playing out a bit and their tape Hell On Earth available now featuring cover art by local artist Taylor Smith.  Staying in Lincoln, fast hardcore bros Discourse have a new 7” Shelter available via local label Nihilism Records that is worth checking out if you want to hear something a bit different.  Moving on to Omaha, Nebraska’s newest transplant hardcore band Relentless Approach have a new cd-r discography now available featuring the previous 7” Juicy as well as raw versions of an upcoming 7” Notorious Thugs.   These guys are very powerful live and are worth seeing.  Omaha moshers Bad Vibes are putting the finishing touches on their yet to be named 12" due out this fall.  Keep your eyes appealed.  Omaha hardcore weirdos Gag Reflex have a 7" available soon via shows only, so ya gotta come out and see them live if you want a copy.  Rounding out scene news new tracks from local upstarts Grimer, Flies, and 13th Year are available via the internet that are all worth your time.  In the upcoming months expect to see new recordings released by chaotic hardcore Council Bluffs, IA band Red Lion, new Omaha grind Astral Menace, as well as new songs from two of Lincoln’s heaviest bands; Nasty Asshole 2 and Feeder/Gainer.

Last month the 3rd annual Nebraska Hardcore Showcase went off without a hitch last month at the Commons and although the turnout hardcore wasn't as strong as last years event, but quite a few old and new faces still showed up.  I always have a fun time at this event and we are lucky that we can throw such large local shows without any drama or fights going down.  You can view the photos I took of this year fest HERE.  In final news, I am happy to report that a new show space has popped up here in Omaha calling itself The Kitchen and have been throwing a show from time to time with more shows happening more often in the future.  It’s good to see a space with a pretty good sized basement, their own PA, and a nice neutral territory feeling that is important to allow the scene to grow.  I expect to catch more shows there in upcoming months.


Lastly, I'm sad to report that Antiquarium Records in Omaha has closed it's doors Sun., but with luck a new location will be found soon.  I have probably spent over 10 grand there throughout the years and It's sad to see another local record store close.  Do your part and support local record stores to prevent this tragedy from happening in your community.