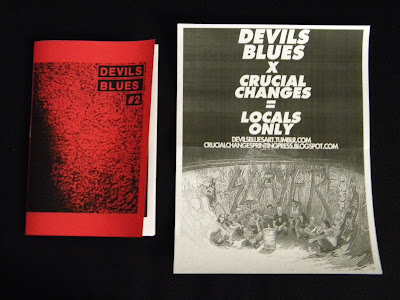 I printed up a limited quantity of new zines featuring the art of Taylor Smith that are available now.  Click the link to buy.


http://crucialchangesprintingpress.blogspot.com
Posted by Keith McG at 12:51 PM No comments:

I wrote this essay for a mini-zine that will only be available with a limited compilation cd-r I made for Chicago Zine Fest.  I figured I'd share it with everyone here so everyone can read it:

Thank you for showing interest in this compilation cd-r.  This was a long overdue project that took a lot of patience to create.  Last year I made a special edition cd-r for Chicago Zine Fest combining two previously released cd-r compilations combined into one package, and the project did really well so I decided to give it another go and what I ended up with an overwhelming response of fourteen bands contributing over an hour worth of music.  Within this disc there is a variety of musical styles ranging from screamo, grind, stoner rock, punk, noise, garage, to melodic hardcore.  This is just a glimpse of what the Nebraska underground music scene is.

The underground music scene in Nebraska is often overlooked and under-appreciated locally yet alone on a regional or national level.  For these reasons I decided that I wanted the cover art to contain a black hole:  something of the unknown.  This is the very same reason why Crucial Changes Printing Press exists.  I feel that the best way to cover the underground scene is to actively be a part of it, while maintaining a strong D.I.Y. ethic:  no outside influences, no keeping the ad buyers happy, no censorship, no bullshit.

The local scene seems to be on an upswing recently and is constantly evolving.  A lot of the bands are quite short lived and break up after only releasing a few demos.  Some of the bands on this compilation are no longer in existence, many of the members starting new bands going into a different style direction.  A lot of the scenes are blending together allowing bands to play to new audiences, with show attendance is getting stronger.  I would encourage touring bands to attempt to play in Omaha or Lincoln while on tour.

There recently has also been a fresh surge of creativity popping up locally, with a growing zine culture with new zines featuring original art, as well as new punk zines covering bands on national and international levels, as well as collaborations with other artists throughout the country.  There has also been a fresh breath of new record labels and art spaces starting up throughout the state.  There are also two great locally produced radio stations that feature timeslots specifically for underground music including live in the studio performances.

Again, thank you for your interest in this compilation cd-r.  I hope you find as much of a pleasure listening to it as I did making it.  Please contact bands and friends for further information.

A huge thank you to all the bands who participated in this compilation and those who helped out in any way during the creative process.